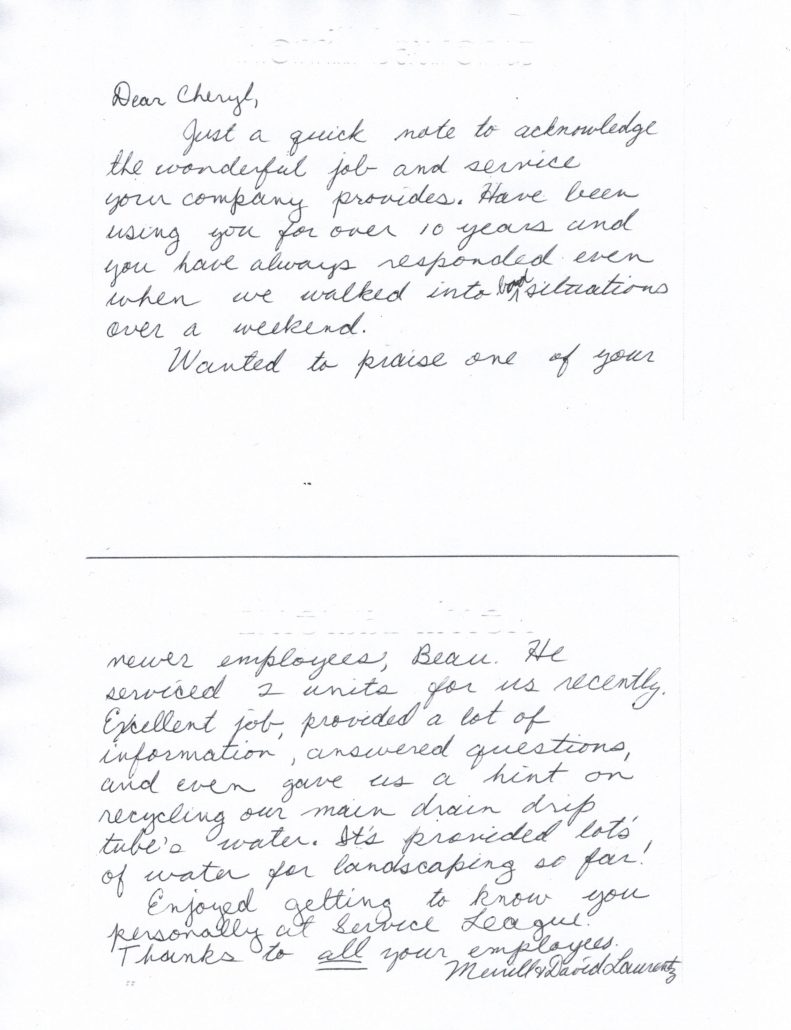 Over 16 years ago when we moved to our first house in Horseshoe Bay we were not familiar with any of the service people in the area so we relied on our Realtor Kay Z. with Century 21 to recommend companies. In some cases she offered a couple of options but in the Heating/Air Conditioning area Ken’s was her only suggestion. Our first call for service was for a routine twice a year checkup which we had always had done in previous houses. We have used Ken’s ever since and have never used anyone else which has included that first house, then in a condo where we lived for a few years and now in another house. We have always found the various service people that we have used to be very knowledgeable and extremely courteous and friendly to work with. On occasions when we have had problems we have always received prompt service including on weekends. When we call during regular business hours we always get to talk to a live, friendly and knowledgeable person.

When I was a board member and volunteer for The Marble Falls Helping Center we had several commercial sized freezers and refrigerators that were originally purchased with the assistance of John K., the owner of The Bluebonnet Cafe. When we had a problem with one of the freezers a few years later John strongly recommended Ken’s. He indicated that he had previously used a different company but one weekend when he had a major problem he called on Ken’s who got the problem fixed and he had used them ever since. Since I was already familiar with Ken’s for our personal heating and air conditioning service I was quick to follow that recommendation. The problem was fixed at no cost to The Helping Center. Later when The Helping Center wanted to add additional refrigeration capacity Ken’s obtained them at cost including delivery and installation. When I have been asked for recommendations for heating and air conditioning service I have always recommended Ken’s.

I have used Ken’s Heating & Air for nearly 20 years at my work site as well as personally. The staff is friendly, professional, courteous, experts in their field, listens to the needs and wants of the customer and their work is above reproach. I signed up for their Maintenance Plan a few years ago and they put me on a schedule and kept my old HVAC system up and running until I finally decided to install a new system this past year. Ken’s is quick to respond to any issue at any time. Their costs are very fair and if a problem arises it is dealt with in a fair and quick manner. Due to their honest, trustworthy and professional way of dealing with their customers I would highly recommend Ken’s Heating & Air to anyone who may be looking for a dependable company to fulfill their HVAC needs.

I just want to thank you and your staff for the excellent service I received. The installers were very nice and polite, amazing for the brutally hot conditions we were having that day. All three staff that I dealt with were very complimentary of your company and expressed how happy and proud they were to work for you. Congratulations! You obviously are doing something right!!

I use Ken’s because of a long-term trusted relationship.  Being in sales, I appreciate loyalty and old fashioned service.  Ken’s will go above and beyond to fix your problem and stand behind their service, you will always get better service when you have a relationship.   I love it that they are a family run business and highly respect their hometown values.

I love the folks at Ken’s Heating and Air Conditioning and recommend them to all my friends. Cheri in the office is very knowledgeable and helpful and very efficient. The guys who do the technical work are all very nice, pleasant and professional. Ken himself has created a great company built on good service.

I just wanted to tell you that I REALLY appreciate your two workers. They were friendly, neat, helpful, and on time. I will recommend your company to everyone. Your prices are fair and the two guys (forgot their names) were terrific.

Every once in a while you get a company that goes an extra mile and exemplifies customer care and service; your company did that for us. I can’t say enough about the professionalism shown by all the members of your company. I had what I thought was a simple service call, that ended up a major repair. Your technician and staff kept us informed and involved and demonstrated a true concern for the proper completion of the project and the comfort of my family.

Thank you for your generous support!! I know how you help numerous non-profits and you have many choices for these precious funds. So this is thanks not only for our Kiwanis Projects, but for what you did this week for our helping center for saving us money on our AC replacement and what you have done for our Hill Country Humane Society. God Bless all of you at Ken’s.